Instant control over your dynamics 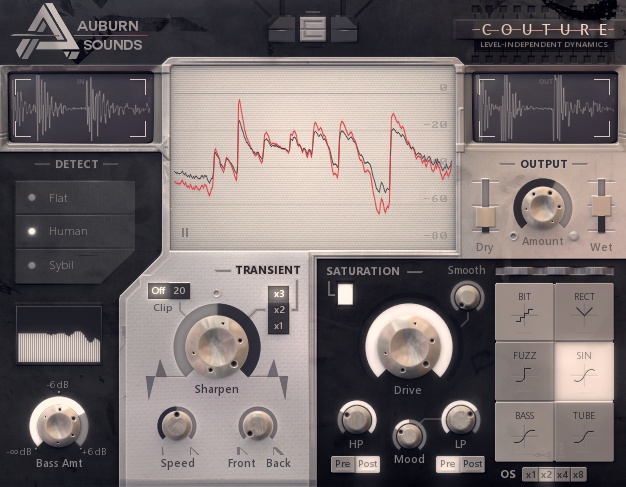 Couture is a two-headed beast: both a Transient Shaper and Saturation processor.

So what do we mean when we say you can get tailored transients?

There is often some overlap in usage cases between saturation and dynamics. Both can be used to control peaks. Some transients prefer saturation, others prefer dynamics.

Couture comes with both Transient and Saturation sections to make related decisions at the same time. For example for a drum track you can increase dynamics and smash it later with distortion.

When using Couture you keep the freedom to change input gain afterwards. This avoids some gain-staging dependencies in your signal chain, that may backfire later in the mixing stage.

Our vision is that transient control could perhaps be something satisfying.

In general terms, a compressor is somewhat longer to tune and its parameters change volume: attack, release, ratio, threshold... they change output gain while you tune them.

Essentially, the Transient section of Couture has only 3 parameters and they have semantic meaning:

To make a parallel with photography, Couture could be seen as a Depth of field effect: you can use it to blur some sources in order to emphasize others.

Couture is available as an AAX, AU, and VST2 plug-in for your favourite DAW.

The Free Edition removes the saturation modules but has no other time limitation: you can use it forever.